New York, NY (June 22, 2016)— HOOCH, a members only cocktail app, today, announced its acquisition of Flux, an on-demand concierge App that grants access to the hottest nightclubs, bars, lounges and sold-out concerts to users in NYC and the Hamptons, and Grotto, an on-demand happy hour App that offers users one-hour prepaid happy hour any time of the day. Rapidly growing since its debut in November 2015, HOOCH echoes the Prohibition Era speakeasies by creating a virtual cocktail society that helps members find the best bars to enjoy their favorite drinks. With the acquisition of Flux and Grotto, HOOCH strengthens its position as a leader in the cocktail and nightlife technology space while expanding its membership database and venue roster.

HOOCH’s acquisition of Flux and Grotto will bring the cocktail app experience to more venues in New York and the Hamptons this summer. As the brand continues to grow and develop, Flux and Grotto’s proprietary on-demand dynamic pricing engine and algorithm will be incorporated into the HOOCH app to manage demand and surge at popular HOOCH venues around the world.

“HOOCH represents a new generation of hospitality tech companies, where we aim to connect consumer, data and technology in new ways, starting with transforming and enhance the social experience of drinking that existed for thousands of years,” said HOOCH CEO Lin Dai, “the industry is evolving, recent consolidations highlight the importance of vertical integration. We believe dynamic demand and pricing management will bring a whole new dimension to on-premise discovery and consumption for millennials.”

As Part of the acquisition, over 20,000 Flux and Grotto App users will instantly have access to hundreds of existing HOOCH venues in cities including New York, Los Angeles and Miami, and start receiving one cocktail every day at participating venues. Flux and Grotto members can download and log into the HOOCH app with their existing username and password, without needing to sign up for a new account. Previously earned “Flux Bux” or “Grotto Hours” will be converted and applied towards monthly HOOCH subscriptions. Flux and Grotto apps have both been updated with detailed information regarding the transition, while allowing members to preview a list of HOOCH New York venues where they can enjoy HOOCH membership benefits.

“We are excited to become part of the HOOCH family of apps,” adds Michael Saltzman, CEO of Flux and Grotto, “Hooch has identified Flux and Grotto technology as an integral part of their future growth. We are thrilled to be at the forefront of the future of ‘drink tech’ and offer our members more options and benefits around the world.”

How HOOCH works: Members pay $9.99/month (less than the price of one cocktail) or $99/per year and are given one round of cocktails on HOOCH at participating venues. Each venue offers HOOCH members a specially curated drinks menu where they can select one cocktail to enjoy with friends.

HOOCH launched in New York in November 2015. The HOOCH app is available for free download in the Apple App Store and on Google Play. 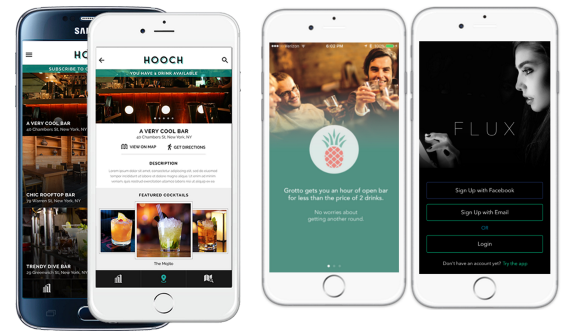